The big news is that I didn’t freeze my butt off. It was nearly balmy, and for those of you who remember NBX in past years as the coldest, most miserable race of the entire season, this sunny, dry, warm weather was just, well, odd. Didn’t seem like cyclocross, somehow.

So the weather was nice and the hotel was its usual, with the exception of a little Peyton Place sort of thing that will not get discussed any further here. Richie and I shopped at Dave’s for our dinner to bring back to our room—a little ritual of ours; the calm before the storm and we relish this little time. Richie decided to race (darn) so that meant up and out to the course really early, 7:30 am.

Yay! It’s lunch time! Eat the world’s spiciest taco (but good.) Then to the pit for Elite Women’s race. Libby got a mechanical early on and decided to call it a day. Britt soldiered on. Everyone did well Saturday. On Sunday, Dan came into the pit on the first or second lap. After the world’s longest pit change (because his pit bike wasn’t operational and we had to put a wheel on his racing bike—will not be discussed here) Dan got back on and in full Russian Frownie Face, back into the race. I wasn’t optimistic about Dan’s mental competitiveness at that point, but hallelujah, he tried really hard. Of course any moaning he was planning on doing after the race was truncated by Sam’s mishap. With one lap to go and Sam in fourth place!!—he and the metal barrier had words, with the result being that Sam, with a puncture wound a half-inch deep, went to the hospital. Thankfully, his best friend’s mother lived a scant five minutes away, and even, better, worked at the hospital. This allowed Richie and I to drive Sam’s car to her house and his father to get on the plane, as intended, to Serbia.

Anthony Clark won on Sunday and I couldn’t be happier. He deserved that win, and the Verge series title. I don’t know anyone who works as hard and as humbly as he does. And it doesn’t hurt that the photo of him crossing the finish line is just about the best winning-a-race photo I have ever seen.

The Good, The Bad, and The Pitiful

Apparently Richie and I are slow learners. I don’t know how many times it’s going to take us finally realize that there are other people in the world trying to get somewhere on a Friday afternoon, especially in the major metropolitan areas we seem to travel on a regular basis. In any event, we didn’t learn it this time, either. Stuck in traffic. But only for an hour or so and at this point in ‘cross season, a four hour trip that was supposed to be a three hour trip isn’t much at all; it’s when the trips ease their way into eight-nine hours that we start to whine. All three of us.

What on earth was going on with the pits?

And on Sunday, the pits were, just to put a little more spice into things, backwards. But by now, we, the pit people, had no expectations of pit-sanity and so we just shrugged our shoulders and good-naturedly helped each other out, as we do.

Alrighty Then, a prologue

Alrighty then is the overarching title I’ve given to blog posts wherein I write about what it’s like to run a cyclocross team with my husband, Richard Sachs. Full disclosure. Unlike Richie, (by the way, you can only call him “Richie” if you’ve slept with him. My rule.) I’ve never raced cyclocross. I had a brief, some might say non-existent fling with road racing when I raced, um, I think once or maybe twice, with the Trek women’s team nearly twenty years ago.

At my first race, I lined up with all the other Type A’s and had an inkling of what racing was about when no one wanted to swap recipes or tell anecdotes while we were waiting for the gun. They’re taking this seriously I thought, and I felt at once intimidated and out of place. When lots of people are gathered together, I consider that a social occasion. Not so on the starting line of a race apparently.

And we’re off! Man, they go hard right at the beginning. What about just easing into it? After all, we’ve got a long way to go. Nope, anaerobic oxygen debt right off the bat. As my heart pounded and my muscles burned, I became uncomfortably aware that other people’s bikes were really close to me. Hope they hold their line I thought, but without much confidence. And why didn’t I have confidence that no one would crash me? Because I don’t know these people, and I don’t know if they can handle their bikes. And why don’t I know them? Because no one wanted to chat and share stories with me when we had the chance, lining up. So there I was, gasping in a pack of really mean looking women, who were looking neither to right or left, but straight ahead with a killer set to their faces that showed full readiness to do battle.

I don’t like battles. At least not obvious ones. And now, much to my dismay, I seemed to be in the middle of one. And what were we all risking life and limb and putting up with a great deal of physical suffering to battle for? This question floated into my naturally curious mind as I struggled to hold my place in the peloton.

The answer came as an epiphany. We are doing this so that one of us can cross a line first.

And now, astute reader, you have no doubt figured out my problem. Because a real competitor would call it “winning.” And “winning” puts a whole different spin on the activity, something that “crossing a line first” doesn’t quite do. Winning is about testing oneself overtly against others in a chosen field. It is throwing all the cards out on the table, in broad daylight, to succeed or fail, for all to see. And at that epiphanic moment, I knew I was not a competitor. At least not with other people.

Motivations duly clarified, I dropped to the back of the peloton where I had some breathing room and found a few other like-minded “racers.” We chatted companionably as we rode the “race.” And just for fun sprinted each other up the final hill climb (I “won.”)

So all this is to say that my perspective on cyclocross is not the racer perspective. I am the observer, the strategist, the big-picture person. And that’s what I’ll be writing about in the coming weeks. 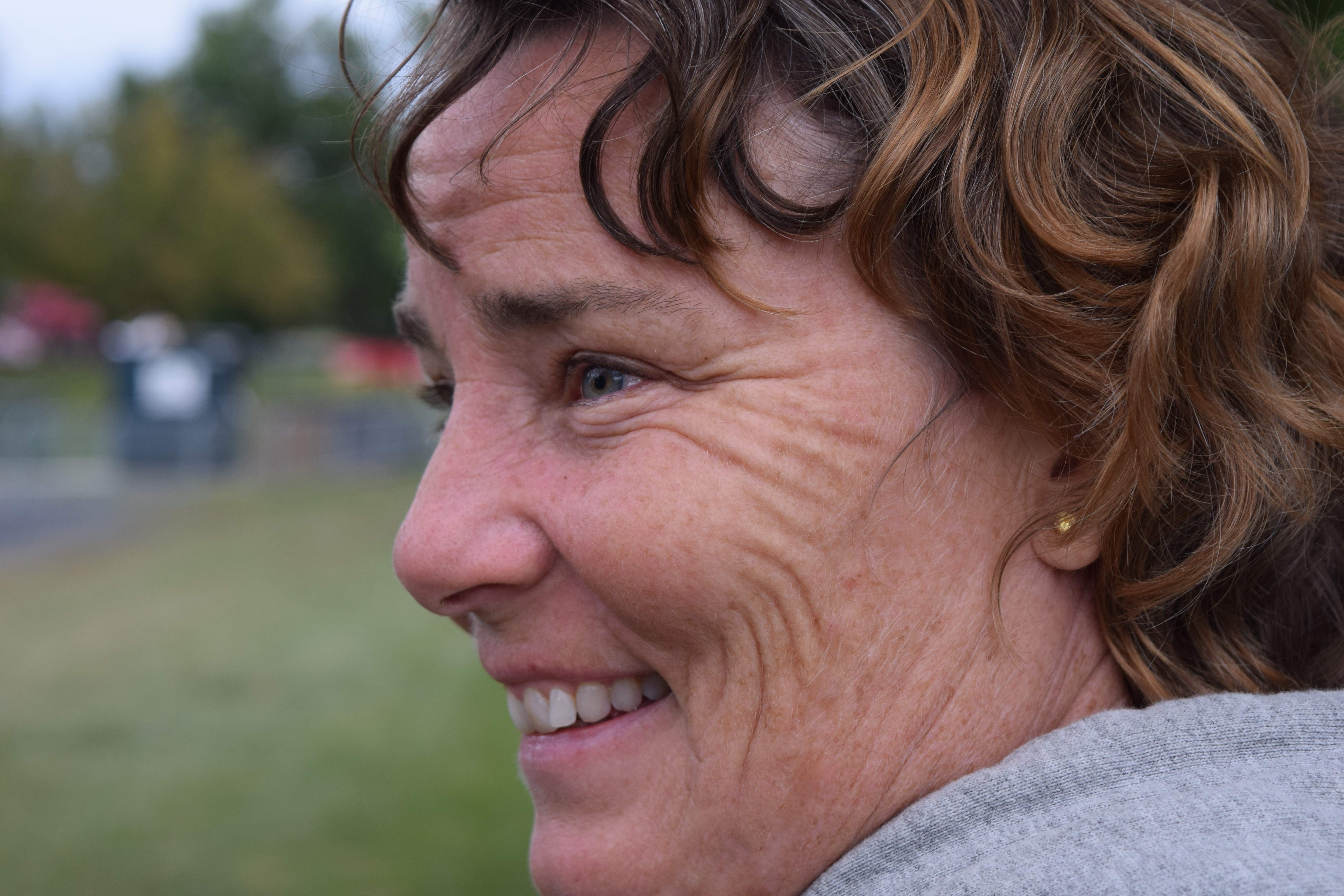 Last Dance of the Season

This weekend, the NBX Grand Prix of Cyclocross, is the last cyclocross race of the regular season for Richie and me.

The kids—that’s what I call them (probably not to their joy) have worked hard, achieving proud results. Dan C. got a UCI fifth place and was on the podium numerous times in local races. Dan T. has won himself many second places in hard-fought UCI races. He’s bummed that he hasn’t stood on the top podium this season (yet) but that’s only because he’s a competitor with a capital C. The rest of us are in awe. BrittLee has regularly finished in the top ten of her elite women’s races, often scrambling to best a place or two just before the end.

Richie and I like to put team memories and sponsor loyalty above race results, but that doesn’t mean we don’t want the kids to kick ass. I once read an interview with the founder of Bikram yoga (a controversial person to be sure, but I appreciated this sentiment) and he said that he loves watching the students push themselves beyond what they think they can do, because then he sees it—that moment when they fall in love with themselves.

A person should not try to take away someone’s right to fail, and when its converse, the right to succeed, is initiated, well…you suffer, your body wants to stop, your mind doesn’t let it, and at the end of the race, you have done better than you ever thought possible. How is it that I can be so strong, you ask yourself? How is it that I can suffer so much to achieve my goal? I must be wonderful. 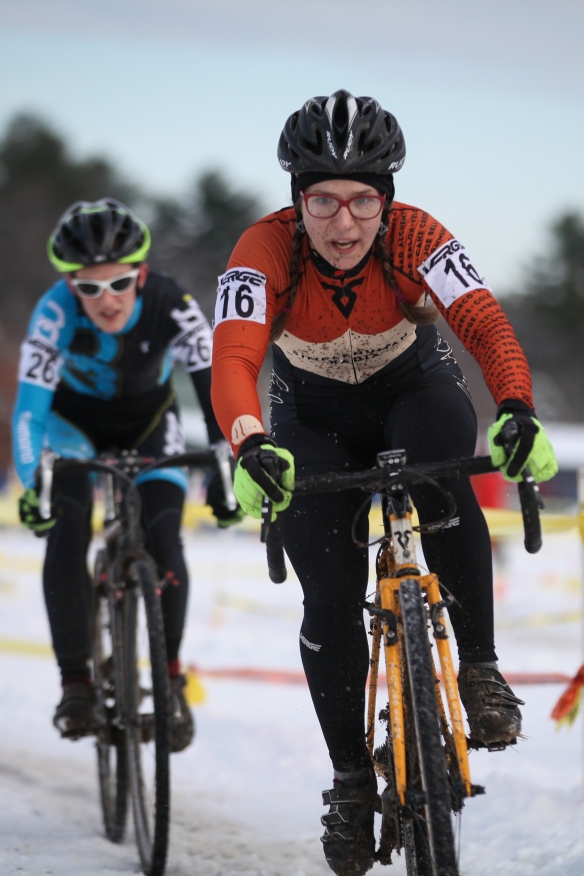 Life in the Pits

This week I am in Boulder, Colorado at the Cyclocross National Championships, which, for those of you unfamiliar with this sport, is sort of like steeplechase on bicycles. A course is laid out with twists and turns and barriers to jump over, stairs to climb up on, steep down hills to freak out on, and the pit. The pit is where the racer can switch to a spare bike or get an emergency repair during the race. I work in the pits. In every race where our team has a racer competing, I hold that racer’s spare bike.

And wait. When the racers come by, I set the bike up, ready to do the switch as quickly as possible if the racer needs it. Reasons for why he or she will switch bikes vary. Sometimes the course is so muddy/snowy that the gears clog up and the bikes have to be cleaned at the bike wash, or maybe something has gone wrong mechanically, in which case the rider will usually try to give a clue before they pedal away on the spare bike. Yesterday, Richie switched bikes and panted out “back is folding” before he left.

Hmmm. Is Richie’s back hurting? Is this a clue to me not to expect much in the way of results from him?

No. In fact, Richie was referring to an earlier conversation he had had with one of our team, discussing tire pressure. He had told Dan he was “afraid the back tire would fold if it didn’t have enough pressure in it.” Mystery solved. We put more air in the back tire and brought the bike to Pit 2 and had it ready for another switch when Richie came around again.

Sometimes the rider will gasp something out that I don’t quite catch. Then, I turn to my fellow pitters for translation help and we usually manage to decipher what is needed. Sometimes we don’t and so I check brakes, gears—the obvious stuff. The last resort is to yell to the rider when they come around again “what’s wrong with it?” But that is unprofessional, so we generally just try to figure something out.

When the course is really sloppy, the riders may switch bikes every half-lap. In addition to riders coming in and out of the pit as fast as possible, the pit crew needs to clean the bikes as fast as possible. The bike wash gets overcrowded, and sometimes we are reduced to just pulling the mud off with our fingers. I was at a race once where we started dumping the bikes into the lake that was next to the course to get them clean—

Oh, I see It is time to get myself up and out and over to the pits. Brittlee is racing in an hour and she might need me.