Buddy went to his first cyclocross race of the season in Rochester, in that lovely Olmstead designed park. Buddy is fond of children, the smaller the better, although I suspect he likes the babies in strollers primarily for the stuffed toys wedged in the stroller with them. He is gentle, though, as he roots out the toys and tugs them from their dark corners. Some babies think this is funny and gurgle with delight as they see their stuffed alligators or teddy bears making their way in Buddy’s careful mouth to the light of day; others become upset as they see their toys changing hands. They are probably future Republicans.

Buddy had satisfying exchanges with three sets of children that weekend. The first was a tiny infant being carried by its mother in a front-harness baby holder. I had Buddy in his own backpack, on my back. In case you haven’t seen it, Buddy sits in the pack with his head and one leg visible, looking like, as someone observed, “a cabby with his arm hanging out.” When the infant saw Buddy on my back, his neutral expression creased into a slow, serene, appreciative smile. Really, it was just like having a Buddhist monk smile at us.

The second was a group of three siblings. They asked (as most children do these days) if they could pet Buddy, who had trotted right up to them. He nestled himself into the center of the three as they crowded around, gently patting and exclaiming about how soft he was.

“I like how his mouth does this,” said the littlest boy and made a small moue.

“I wish we could have a dog. We might get one,” said the middle child, a small boy, with an Arab name.

“We won’t get one,” said his older sister, who had early adolescent pimples and braces but who seemed full of joy. She hadn’t said it to be mean, I could tell. There are disappointments in life, she seemed to know already, and there was no point in pretending otherwise. I really liked those kids.

The third encounter was a little four-or-five-year-old who marched up, and asked to pet Buddy.

As soon as I said that, I knew it was wrong and the child set me straight at once.

“I’m not little,” he said without rancor.

Facts restored, he proceeded to pet Buddy. “What’s his name?”

He paused, his face wrinkled in puzzlement. “What’s his nickname?”

I cracked up. Because, really, he had a point.

“Little potato,” I said, and now the boy cracked up.

An hour or so later, Buddy and I were near the finish line and I heard a shrill, piping

voice behind us, getting louder, “His nickname is little potato.”

I looked around. The not-little kid was ushering a group of friends over.

“His nickname is little potato,” he informed them again, bending down to pet Buddy proprietarily.

My dog, Buddy, is a Maltese. It’s an ancient breed—two thousand years old. And since the Maltese wasn’t bred for anything but to be a cute companion, that’s two thousand years of lapdog-ness. In a dog-like devotion to please, he fails utterly. He doesn’t care one whit whether you approve of him or not. He is also not keen on taking walks or obeying. He’s kind of like a cat, actually. He is very cute, though.

One day, I went for a hike in the woods and I took Buddy. Once we were away from the road and in the woods, I took his leash off and he seemed puzzled.

“Okay, go run along the trail like a dog,” I told him.

He looked at me as if to say, “What part of ‘lap dog’ are you not understanding?”

I began hiking along the trail. Buddy followed, reluctantly. Then he started to get the gist of it. Oh! Sniff at stuff! Eat deer poop! And that’s when Buddy, ancient breed of luxury, began to let his wolf DNA filter through.

“Yes!” I told him, “you are descended from wolves!”

Now that he’s figured it out, Buddy loves to hike. He gallivants along the trail ahead of me. He sticks his little white head into crevices to scare chipmunks. He laps water from streams when he is thirsty. He hops from rock to rock with insouciance. And once, forded icy cold water up to his chest. He comes alive in the trying of new things.

The Good, The Bad, and The Pitiful

Apparently Richie and I are slow learners. I don’t know how many times it’s going to take us finally realize that there are other people in the world trying to get somewhere on a Friday afternoon, especially in the major metropolitan areas we seem to travel on a regular basis. In any event, we didn’t learn it this time, either. Stuck in traffic. But only for an hour or so and at this point in ‘cross season, a four hour trip that was supposed to be a three hour trip isn’t much at all; it’s when the trips ease their way into eight-nine hours that we start to whine. All three of us.

What on earth was going on with the pits?

And on Sunday, the pits were, just to put a little more spice into things, backwards. But by now, we, the pit people, had no expectations of pit-sanity and so we just shrugged our shoulders and good-naturedly helped each other out, as we do.

I’m way behind in my indoor work; my writing schedule has gone to pot, I haven’t even started on my website; all that yarn I spun is still waiting to be woven off on the loom, and I haven’t even ordered my seeds yet. My upper body strength, however, is flourishing.

Buddy, the Adventure Maltese, is currently not having any adventures because he is confined to running around outside shoveled paths since the snow is twice as high as he is. He makes the best of it, though, galloping back and forth in his white canyons. He’s a plucky one that Buddy.

I’m thinking I’d like to take advantage of all this snow we’ve got and go snowshoeing or cross-country skiing on the pond.

If I can ever carve out some free time. 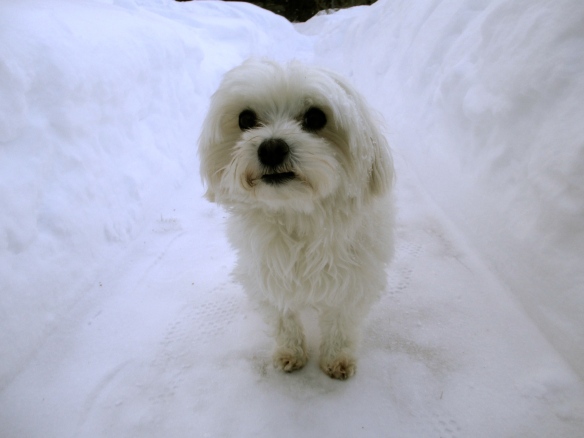 Over the River and Through the Woods: A Post by Buddy

I think that title is very clever of me because…I am at Grandmother’s house! It is Chanukah, so we are visiting dad’s mom, who is my Nanny Bobbe.

Where Nanny Bobbe lives is very different from where I live with mom and dad. It’s a place called New Jersey. In New Jersey, there’s millions of people and cars. We stop and go, stop and go, and I look at the other people in the cars next to us with my most appealing expression to brighten their day, but most of the time the other people in the cars are looking at a box in their hands and moving their fingers on it and they don’t see me at all. Which  is too bad, because I think seeing adorable me would make them happier than a box in their hands. But maybe looking at the box is a rule here. Also, I’ve noticed that there is almost always one person per car and that the bigger the car is, the smaller the person who is in it. That might be another rule. I’ll have to observe more because I like to think of myself as a worldly Maltese and so I like to know how things work.

When we get to Nanny Bobbe’s, I go in my bag, and we go into the building and then when we’re in Nanny Bobbe’s house, I go out of my bag and look cute and everyone tells me how cute and well-behaved I am. Then mom gets me some water, and I lay down and look adorable and everyone says how adorable I look. So what’s not to like about New Jersey?

This year I became acquainted with the “Chanukah gelt” tradition. Mom and dad think it’s wonderful, but for me it’s just ho-hum. Being the well-bred dog I am, though, I’d never let on that I’d rather have a toy that has a bit more squishiness to it.